There’s a United Church tradition that goes all the way back to the days of our founding denominations.  It’s a tradition that says that ministers are not employed by individual congregations but by the church as a whole.  Think of is as a minister library.  You take out on loan a minister who will hopefully teach, lead and care for you and you will care for that minister with a liveable wage and Nanaimo Bars.  After a time, sometimes short, sometimes long, that minister is returned to be borrowed by another congregation and you are loaned another.

I think readings like today’s are part of the reason for this tradition.  I’m sure that in some congregations that aren’t as kind and open minded as this one, a reading like this, that pokes so very hard at wealth, would get a minister run out of town if their employment was dependant on keeping the church members happy. 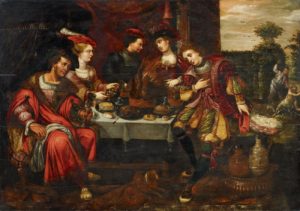 Here we have a story about a great divide between 2 very different people.  The first character we’re introduced to is the rich man who is dining sumptuously in his linen and purple clothing.  Purple in significant because it is the most expensive cloth available and it was fashionable at this time to use linen, a very pricy fabric, as rich people underwear.  As we talked about last week, as soon as the crowds heard this description, you’d likely hear the boos and hisses from the crowd.  It would be like me, in certain circles, starting a story with, “One day as Donald Trump rode in his private jet…”

On the other side of the spectrum we have Lazarus.  He’d also be a familiar character for Jesus’ listeners because every city would have these poor beggars.  Often, they were former farmers who had lost their land in debtors court to those like our friend in the linen delicates.  Yes, the rich man might rent Lazarus’ land back to him but he’d keep the rent higher than the potential profit so all of Lazarus’ family would also have to work endlessly to keep up, increasing the rich man’s profits but falling farther and farther behind.

Here we have Lazarus lying in the street waiting for scraps.  While in the best restaurants today, you’l likely find cloth napkins but back then, they often used flatbread to wipe their hands and faces which would then be collected by the servants and thrown into the street with all the rest of the garbage and sewage to be fought over by dogs, rats, and people like Lazarus.

There is no social safety net.  There are no homeless shelters or employment programs.  When people were driven off their farms and into the city, they lived very short, degrading, cruel lives.

This is the reality into which Jesus speaks.  This is one of Jesus great concerns because he knows God has always had a soft spot for those who suffer.  This is why Jesus started his ministry by saying that God has anointed him to bring good news to the poor.  Maybe this is why, of all the parables that Jesus told, poor Lazarus, the man who is only worthy of companionship of dogs, who dies from his poverty, who the proper people of society would rather not even see, is the only person that Jesus honours with a name.  Not the rich man, not the manager from last week, not even the samaritan or the father of the prodigal son.  Poor Lazarus alone, is given a name in Jesus’ stories.

This story also doesn’t say that being poor is in itself virtuous any more than being rich is virtuous.  I don’t really think Jesus cared about money itself but more what was done with it.  I think Jesus’ priorities are somewhere else.

Back as a young adult in Vancouver, each year I would join in the yearly peace march through downtown.  Many thousands of people coming together to protest the foolish notion that accumulation of ways to kill each other is the only way to ensure peace.  I remember there was a Shell gas station on the march route that always had people with packards and protesters all its own.  I probably didn’t understand at first but this of course had to do with Shell Oil’s support of the apartheid government of South Africa. 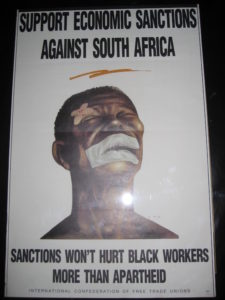 As I asked questions about this, I learned about the systemic racism and segregation used against the South African black majority.  I learned about Nelson Mandela and others who were imprisoned for demanding justice.  I also learned that the United Church of Canada as well as some other churches took a very controversial stand in supporting economic sanctions against South Africa to help pressure them into changing their policies as well as pressuring the Canadian government to halt trade with South Africa.  Many people over the years have asked if economic sanctions actually work but according to those who ruled at the time, it was that pressure from the rest of the world that made a key difference.

Moving to our home country, we move to other issues that are surprisingly related.  It is well documented that the South African government studied Canada to find out how we had made apartheid palatable for our own indigenous population.  They were of course meaning the system of reserves set up across the country which is another form of segregation and institutionalized paternalism which has led to more abuses than I have time to mention.  Here too though, we find the United Church trying to heal relationships and undo the damage that the United Church also participated in through our role in the residential school program.  The church has become a strong advocate, lobbying governments and walking alongside our indigenous siblings.  We’ve made moves that give real voice to indigenous voices in church courts.  This year we remember the 30th anniversary of the United Church’s apology to indigenous people for the very real harms the church helped cause as well as the promise that we would work to mend relations. 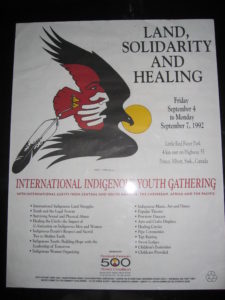 You see, in this reading of the rich man and Lazarus, we get a strong hint about what Jesus cautions us about.  After they both die and Lazarus is seen in the company of Abraham, the rich man can get no relief because of the great chasm between them.  This is not necessarily a description of the afterlife but an allegory of this one.  When we look at any of the injustices of the world, when we look at the suffering so many face, it has to do with that same chasm.  When we have economic policies that favour those who are already wealthy, that chasm between rich and poor grows.  When we build policies that divide people by imagined classes or notions of race, that chasm grows.  When we can put out of our minds the suffering of refugees around the world because they’re not us, or simply because it’s easier not to see, that chasm grows.  If we found out that there was a factory in Moose Jaw that was chaining child slaves to sewing machines so they could be forced into working impossible hours, the outrage amongst this good city’s population would have the factory shut and the owners imprisoned in no time, but because there’s a chasm of space between us and the factories of Bangladesh, it’s just simply too easy to ignore, it’s too easy to shop for our cheep cloths made by those same slaves.

Jesus doesn’t care how much money we have but he cares very deeply if our wealth or our poverty digs chasms between people who should be siblings and neighbours.  The rich man never got it.  Even in death he shows no concern for Lazarus but only for his brothers who share the same fate.  He doesn’t even speak to Lazarus but is only concerned about how Lazarus can serve his comfort, delivering water to wet his lips.

Even though on a global scale, most of us are living lives of great wealth, we don’t have to be like our poor rich man.  We can use our gifts, our wealth, our choices and our voices to fill in the great chasms that divide us from them so that we may all become we.  To quote the Jewish Talmud:

Do not be daunted by the enormity of the world’s grief.

You are not obligated to complete the work, but neither are you free to abandon it.

Note: The painting above is “Lazarus and the Rich Man” by Frans Francken II and the posters are a part of the “Conveying the Message of Change” poster collection on display at St. Andrew’s until October 14.  For more information of hours, contact the church office and for more on the curator of the collection visit http://www.donkossick.ca