Humility is hard.  I’ll be walking to church and I look up at this grand building and think, “I work here!  I must be a whole hill of beans and a carrot on the side!”  Then I realize my lack of humility and feel a bit embarrassed and remind myself of that bit of instruction from Micah, to walk humbly with our God.  So maybe I start living up to this difficult advice, I actually start living out some humility and then what happens, I start thinking, “Look at me being all humble – I’ve got this mastered!” And then the whole process has to start again.

Maybe this is why today’s reading is a bit of a challenge for me.  Once again, I’m hearing Jesus tell a parable and I’m left wondering which character represents me.  Am I the repentant tax collector or the boastful pharisee?

Here we have this pharisee walking on up to the temple, singing to himself, “O Lord, it’s hard to be humble.”  He’s on his way to pray.  Yes, anyone could pray anytime, but there was still this belief that in the temple, you were closer to God and so just maybe, there’s a better chance that God will hear you.  Maybe he’s also there so that people can see him being so very holy.  It’s fine and all to be a good person but it’s even better if others notice.  He prays loudly that he fasts twice a week and that he tithes, giving ten percent of his income to charity.  He also thanks God that he’s not like this tax collector who’s prayer is far more simple, “God, be merciful to me, a sinner.” 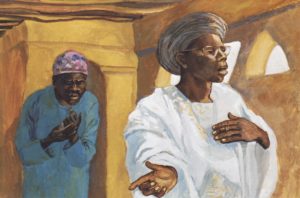 JESUS MAFA. The Pharisee and the Publican, from Art in the Christian Tradition, a project of the Vanderbilt Divinity Library, Nashville, TN. http://diglib.library.vanderbilt.edu/act-imagelink.pl?RC=48268 [retrieved October 23, 2016

Now let’s not be too hasty judging this guy.  Maybe you might even start to think, “thank you God that you didn’t make me like this pharisee,” and in so doing, become the pharisee yourself.  And why shouldn’t the pharisee feel some pride.  He’s actually going above and beyond Jewish law.  He’s required to fast once a year on the day of atonement but he’s fasting twice a week.  That takes some pretty serious spiritual discipline.  He’s also giving ten percent of his entire income.  By law, he’s supposed to tithe the fruits of his fields but he’s also handing over a portion of that salary he takes from being a teacher, as well as that gift shop he owns on the promenade that does so well with the tourists during festivals.  And being a pharisee, he’s opposed to the Roman occupation and insists on obeying the law of his people, no matter how difficult it is when forced to also follow Roman law.

He’s also comparing himself to a tax collector who’s praying for forgiveness and so he should.  Unlike the pharisee he’s colluding with the Romans, using their unjust system of taxation to line his own pockets.  He’s betraying his own people and bringing shame to himself and his family.  While I may not have proclaimed it so loudly in the middle of the temple, I’d be feeling pretty smug as well, I too would be pretty thankful that I’m not like this low life extortionist.

So I guess that settles it. I’m probably much more like the pharisee than the tax collector.  I try to obey God’s law.  I tithe all of my income.  While I don’t fast, I have devoted my professional life to spreading the Gospel.  Why shouldn’t the Pharisee be proud?  Why shouldn’t I?  I know that many of your lives are marked with good deeds and generous living so shouldn’t you feel a bit of pride?

And don’t we admire people who take pride in their work?  Isn’t it an insult to say that someone has no pride?  And if we weren’t supposed to feel proud of our accomplishments, why does it feel so very good?  On the other hand, isn’t pride one of the seven so called deadly sins?

Well, sort of.  When we talk about the sin of pride, what we’re often meaning is hubris which is a bit different.  Pride is saying I did this well.  Hubris is saying I did this well so now I’m a better person than you.  Hubris is putting oneself above others and here is one of the great faults of the pharisee in the story.  He gives to charity and fasts?  Great, good for you.  That’s absolutely admirable.  But he also says, I’m so glad that I’m not like these poor sots.  Now he’s placed himself apart from his siblings.  He’s using his skills and gifts, not to better humanity but to separate himself from humanity.

Hubris is everywhere in our world still.  Think of theft – it’s often one person believing that they are more deserving of another’s possessions than the person who owns them.  Wars are fought because one country feels it is more deserving of that land or resources than those who were foolish enough to build their country on the land we deserve.  Our environmental challenges are based on the hubris of thinking that our way of life, our comfort, is more important than the right of future generations to have clean air or a livable climate.

Hubris has, throughout history, plagued our churches.  Like the pharisee’s prayer of thanksgiving that he isn’t like the tax collector, the wrong kind of people have been told that they’re not welcome, or not worthy to be in church leadership.  It was only 80 years ago that the men in charge of United church let go of hubris and admitted that women not only could lead, but had indeed been leading Christian churches all along.  Christians have had the hubris to think that it was up to them to fix others who live differently, whether it’s indigenous people, gays and lesbians or people of other faiths.  Christians have used their gifts and skills to build church communities around the world but sometimes, it hasn’t been for God’s glory but human glory.  Not to serve God and humanity, but as shrines own self worth, our own glory, our own power.

And here is the greatest flaw of this pharisee.  There’s a little bit of a play on words in this reading that is a bit lost in english.  It could say that he was standing by himself and praying, but it could also say that he was standing and praying to himself.  While he may be in the temple, while he may be following God’s law, his hubris has not only put himself above others, he’s also put himself before God.

You can hear it in his prayer which is really a prayer of thanksgiving for being such a great guy.  It’s a prayer of thanksgiving that he’s not like other people.  The thing is though, that division wasn’t God’s doing.  It’s his.  God creates us all equal.  In all our wonderful, glorious diversity, we are all loved by God, all equally deserving of God’s grace.  It is humans that divide and so when he prays a thanksgiving for his separateness, that is a prayer to his real god, himself.

I believe God wants to be with us.  I believe God yearns for us to enter into relationship with God and with all of God’s children.  I think of it as a great dining room table where there’s a seat for everyone.  In front of every seat, there is a gift.  Some are given the ability to lead, some great compassion, some a high intellect, some seem to have been given the ability to test the patience of others.  Every person on every seat is precious to God but when that one hubris filled child insists that others aren’t worthy and that they are the one with the authority to choose who is and who is not invited to the feast, what’s God to do?  I get the feeling that when we are so prideful that we decide put ourselves above others, we’ll more than likely find God with those we exclude, the tax collectors of our world, the tax collectors who go home justified.

I think we can be a bit proud of the gifts God has placed before us.  We can be proud that we’ve been invited to this wonderful, global banquet table.  Let’s not however let that pride lead us away from joining God is the feast.