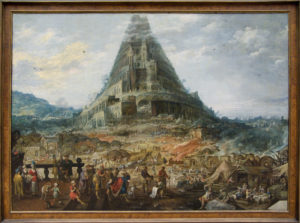 Oddly enough, I used to like going to the doctor’s office as a child.  No, it wasn’t because of the needles or terrible tasting medicine.  It was because of all the books in the waiting room. My favourite was the illustrated Bible stories.  There was the picture of the ark with all the animals walking 2 by 2, and none of the mess left behind that anyone who’s been in a parade behind the horses knows about.  Then there was the picture from the Tower of Babel.  In the background was the tower with dark clouds and lightning while everywhere were the people running with terror on their faces.  God’s ticked off and that tower’s going to fall on their heads!

This story was always a mystery to me.  Others were more straight forward like the garden – God put the man and the woman in the garden, they misbehaved, and so they were kicked out.  Sure I was missing the nuances and symbolism, but I could understand.  A big flood is coming so Noah builds a boat to save himself and the animals.  Sure, I get that.  But this tower…people work together to do something great but God doesn’t like it so causes them to speak in all different languages.  Even today, doesn’t this seem a bit odd?

Of course, there are many ways we can take this story.  We can take it as my 5 year old mind did and see it as a confusing event of history.  But then, how tall do we go before God gets angry again.  The C.N. Tower didn’t do it.  The Burj Khalifa in Dubai didn’t do it. Maybe the mile high building that’s planned for Tokyo Harbour will bring on God’s wrath.

We could take this story as a creation fable.  This is the final story of a whole section of Genesis which describes the world and why things are what they are: sin, the earth, day and night, rain.  But this explanation leaves me feeling unsatisfied.  There’s something to this story that’s more important than a simple creation story and maybe to ask if this is a work of fact or fiction is to miss the point.

The story’s pretty familiar to most.  All these people, who have the same language get together to build a giant tower within a new city.  This seems pretty reasonable but let’s look at their motivations.  First, they want to make a name for themselves.  OK, maybe we’re stepping into the pride bit here which might concern God.  The other motivation they name is that they don’t want to be scattered.  They want to build their own space where they can keep others out and stay close to those who are like them.   So maybe here, we’re getting closer to a problem.  They don’t want to build a city to create a healthy civilization where they can worship God.  They don’t want to build a sanctuary where strangers will be welcomed.  No, they’re doing this out of a need to feed their own egos and out of fear – very poor motivators for any undertaking.  Maybe God is right to be concerned.

It actually doesn’t say that God knocks down the tower of destroys the city, but they’re given different languages so they can no longer communicate and as they feared, they become scattered across the earth before they can finish building.

This story is odd, not only in it’s own narrative but wasn’t it just last week that we talked about Jesus’ prayer that we all be one?  There may also be something to how this reading is always pared with the Pentecost story where all people are made to understand each other, seemingly undoing what God did in the Genesis story.

Maybe some of it has to do with the word, “scattered.”  Talking about something I know nothing about, if the Saskatchewan Roughriders are playing against Calgary there’s a few strategies they could use.  First might be a strategy rooted in fear.  Those Calgary players are huge!  I wouldn’t want to be on that field with a few of their linebackers charging at me.  My first instinct would be for everyone to stick together and protect each other.  I don’t want my teammates running away to intercept anything – I want them to stay with me and protect me.  Another strategy, and one that in my ignorance would seem to be more winning, would be to scatter – get out there and cover that dangerous field.  Face the risk of being crumpled so that they might win the game.

We are a part of God’s team and while I’d never want to use that language of winning and losing when it comes to matters of faith, we do have a call to play this game – we are called to scatter across the field of God’s creation, intercepting those in need and tackling fear and greed.

But what about this idea of the Pentecost event undoing this story?  Well, when the spirit blew through that room all those years ago, it didn’t cause everyone to speak the same language.  Instead, everyone was able to hear each other in their own language.  God did not undo the diversity that he put in place in Genesis.  God never undid the scattering of people across the world.  Instead, those huddled, frightened followers of Jesus and all present were empowered to hear all languages – and why would God do this, so that they too would travel the world speaking to each and every person in a way that they could understand.  This too is a scattering story.  The disciples were huddled in their own Babel tower, fearful of the world, and God sent them out.

2000 years later, the Gospel has indeed spread, and while the motivations and the results have not always been perfect, I believe the world is petter for God’s people being scattered.  But also after all these years is that same resistance, that same desire to make a name for ourselves instead of for God.  That same fear that makes us want to huddle into our own Babel tower, stick with our own kind and lock away the world.

What about us and our grand church?  What was the motivation for the original building or the rebuilding in the 60’s?  I choose to believe that the main force of those efforts were to build something great, something that would glorify God and be a welcoming place for all God’s people.  Still though, could there have been a hint of ego in there as well?  We’re going to build the biggest, tallest church in Moose Jaw and we will take pride in what we accomplished and people across this city will see this church and think, “that’s a church for some very important people.”  Who’s to say what the motivations were so very long ago.

But what about today?  We have this great tower?  So maybe we need to paraphrase this age old story to fit St. Andrew’s and what we might hope for our future.

There was once a community of God’s people that spoke a similar language.  Amongst themselves, they talked of God’s love and grace.  They talked about finance and building maintenance.  They talked of great and glorious food that could be eaten for any and all occasions, and it was good.  This church met in a grand and tall tower that could be seen from great distances across the prairie land.  They listened to scripture and learned that Jesus called them to be one and the people rejoiced that, yes indeed, they were one congregation, strong in community and dwelling in this beautiful building.

But then they heard another story.  They heard of another people who shared a language and also dwelled in a great tower but they only looked to themselves.  They were afraid of the world and rather than engage that world, they put bigger locks on their doors.

God noticed these people and if they were going to be called God’s people, they had to give up fear and they had to live out their faith but no matter how many times God asked them to go out, they hid deeper and deeper.  So God confused their language and scattered them, and real estate agents helped the trustees sell off the Babel tower.

The good people of St. Andrew’s were clever people and learned from scripture.  They didn’t want this same fate to befall them and so they decided to follow the Pentecost Spirit and go into the world.  They engaging people in languages they could understand.  They told the world that God loves them and wants everyone, in all their wonderful diversity, to understand we’re all one family.

Because the good people self scattered and followed the spirit, God didn’t have to and so they still had their great tower to come back to.  They used this tower as a place for inspiration and rejuvenation so that they could scatter week after week and the world saw them as neither fearful or prideful, but spirit filled sharers of wisdom, love and joy.  Let it be so.